Abby Daleki grew up in Wisconsin and received her BFA and MA from Minnesota State University in Mankato, MN. Currently, she is an MFA candidate at the University of Delaware. When Abby isn’t petting her two adorable cats, she can be found playing drums, belly dancing, or writing poetry. We interviewed Abby about her work and process. Here is part of the interview that will be featured in the upcoming issue of Life Raft:

LR: Can you start by explaining your process; you can be as brief or as detailed as you want.

A: I can talk about my new process. I just started this within the last two weeks. I take polyurethane and I mix it with acrylic paint and I make pours on plastic to kind of emulate the shapes that I make in my abstract paintings, which I would consider them blobs because they’re kind of organic shapes. So, I make these pours with different colors and let it dry. It’s almost like Fruit Rolls Ups when you peel it off. After it cures, it’s kind of crusty, so you can hang it on a nail and it drapes. I’ve been making foam shapes as well. So, I’m moving into more “painting as an object,” taking all these elements from my paintings and making them 3D.

LR: And you started doing this about two weeks ago, would you say that you had a pretty consistent process before that you broke away from?

A: I had a dictionary of shapes, I guess you could say, and layers that I worked with. I would put down a watery layer of paint; a background or wash and then I would put some blobs on top of it and then another layer of expressive brush strokes. I was layering this specific element on top of this specific element in many layers over and over again.

LR: What makes a successful piece for you? At what point is your experimentation finished? 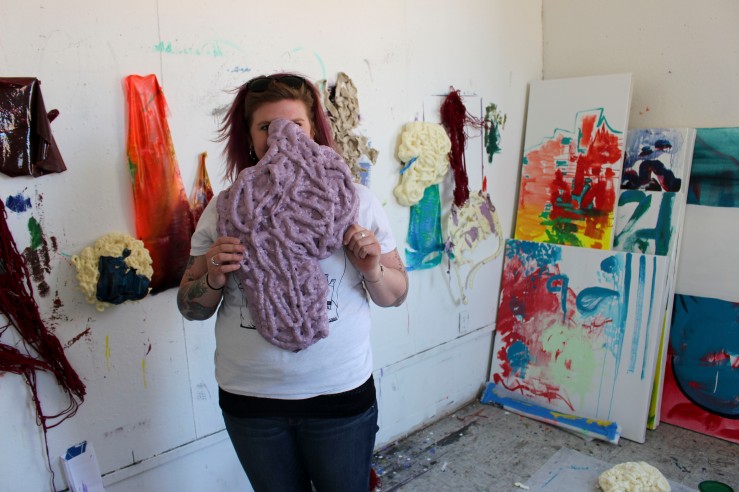 “As a human, I’m very okay with my being and my art reflects that.”

A: Definitely. Sometimes, it’s not right or correct in terms of viewers, so sometimes it’s… I don’t know, I don’t think I have any finished work right now.

LR: Do people who don’t know you ever look at your work and wonder if a man or a woman makes it?

A: I don’t think so. No one has ever really said that. Someone once said to me that art made by a woman is automatically about feminism and I didn’t know what to think of that. Or, it was automatically “feminist artwork” because a woman made it, which I don’t know if I agree with. 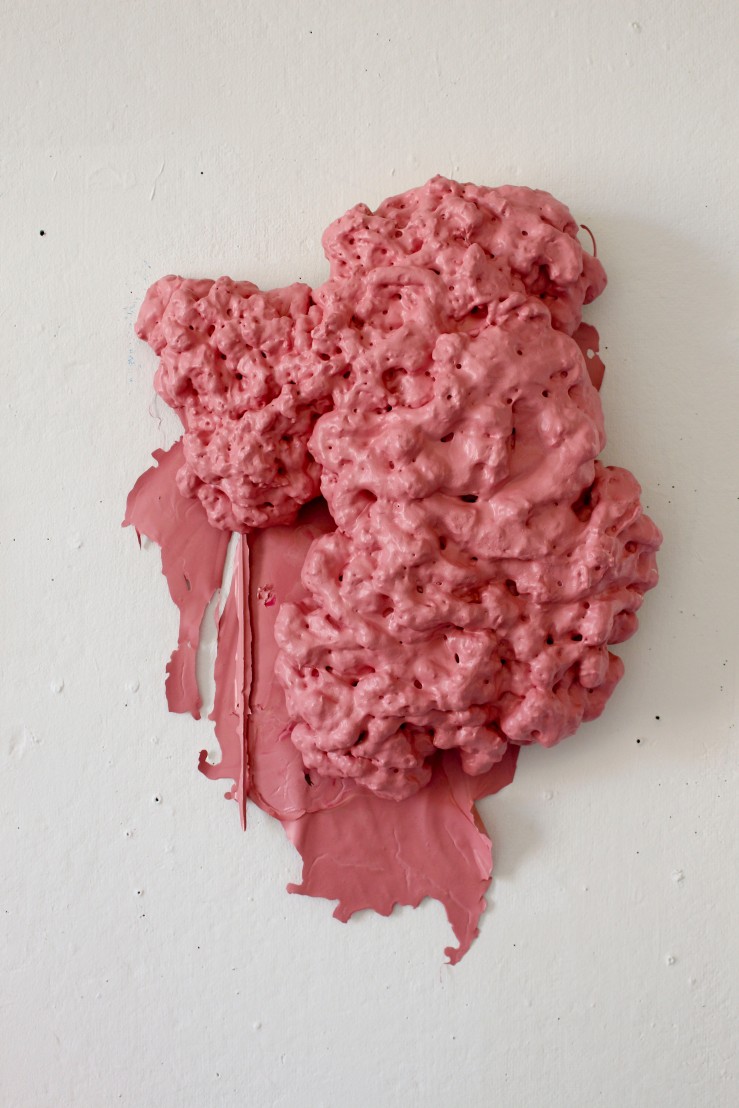 Check out Abby’s work on Facebook at Dareki Art

*The entire interview will be in our next issue, stay tuned for May 17th.

The University of Delaware’s MFA trip to Berlin, Germany was eye opening and inspiring on a number of levels. So many of the women we met were working towards an almost unnamable vision. They were careful not to allow language and terminology to constrain that vision. A curatorial project blurring the lines between the role of Artist and Curator wasn’t simply a “project space.” It was broader than that. A large open room in a former Malt Factory, empty aside from a few multi-purpose structures doubling as tables and display boards, spoke to the often fluctuating nature of the role of objects and experiences in our daily lives, as well as their under-utilized systems of representation. The space’s sparseness reminded me that there is always room for something else.

After a week of studio visits, museum tours, and conversations with a majority of women Artists and Curators, I came back to the States with some major questions. Is it an economic necessity that these spaces are fostering collaborative efforts in the arts? Would it be more economical to commit to some form of categorization? Is it possible that the arts have evolved past a reliance on branding and definition? Or can we look at the art endeavors of an organization with the same view we see individual artists? That is—the importance of art making speaks for itself—so the necessity for an art organization to promote a strategy for economic gain is beside the point.

That was the framework in which I felt a dramatic shift between the views of community-based projects in American and those in the small sliver I saw in Germany. For an arts organization to survive in America, the mission must be easily defined and accessible—an “artistic prescription” or a “social antidote,” simply located and pulled off the shelf. The lack of specificity in some of the organizations we visited, notably DISTRICT, was refreshing and, at times, beguilingly amorphous in nature. I see this as a strength and a vision of hope that can also translate to modes of thinking for an individual artist. There is an opportunity to learn from such models of thinking—to become more cognizant of our own self-containment.  How much self- or otherwise-definition of our own practice is actually necessary? Are we making decisions for ourselves or for the expectations of others? Is the caricature of women as patient, nurturing, and communal by nature, a biological imprint? Perhaps these traits are defense mechanisms due to social and cultural necessities. Or maybe it’s more than an after-effect or an instinct. Perhaps it is a strategy: a search for more openness and for more inclusion.

I’m going to make some generalizations here, because I’m tired of being careful. And I’m going to write from personal experience with the hope and assumption that I am not alone. Yes, much of this applies to male artists as well. Yes, there are always exceptions to the rule. But I would argue that our culture fixates, mystifies and idolatrizes the exceptions rather than including them within the fibers of a collective experience. And I am not interested in doing that. I am interested in the ways in which our individual actions can collectively benefit us as a society.

I’ve begun to recognize some threads within the artistic process of many working female Artists—some observations that provide the ever essential hope for the future of Art and feminism. I can best describe this phenomenon as that of an intuitive collaboration with material and process, which lends to future, unanticipated discoveries through the structuring of chance situations. There is an inherent absence of the ego in such a process. There is no imposition of the will on future actions or inanimate objects. The process exhibits a deep trust in the self that manifests as the ability to allow and to recognize the beauty of unnamed possibilities.

I am of the belief that artistic experimentation leads to discovery, and in turn, creates more space. We need more space within the western dialogue of aesthetics; more space for what constitutes artistic merit; and more space for the simple act of creating. The trend for women to be generally more process oriented is an indication of—and a necessity for—change. Women in the arts are creating more space for themselves, and this attitude must continue in all aspects of life. I encourage female artists everywhere to create un-self-consciously. To make work despite the presumption of future accolades or potential criticism. The way to a broader understanding of ourselves is through process: the process of creating, as well as the time required to mentally process and reflect upon our actions.

Women must give themselves the permission to create art with unrestricted spontaneity. Spontaneity doesn’t have to mean doing something “crazy” or “wild” or “in opposition to your personality.” It is the act of recognizing an entrance into an unknown. To create, knowing that confidence will result from granting yourself permission, and needn’t always be present in the initial steps of a working method. It is being aware and appreciative of the steps taken, and not a singular end goal. It is viewing an act of “failure” as an opportunity for knowledge and growth. Some information can only be received through indirect passages. Fail. Over and over. In biological terms, this is how we change. A series of failures or risks will lead us to eventual advancements.

The beauty of Art is that it is both real and it is metaphor. You are really living through the work you are creating. Once the work has been created it stands as a symbol or metaphor for a lived action. In this way, it translates as a language to those around you. This creates incredible potential and opportunity for both “failures” and “successes.” Art gives us a living record of attempted changes right in front of us.

As a woman, there is often pressure to be ready for everything. Society tells us to be 100% every second of the day. To be 100% knowledgeable and articulate. To be 100% healthy and attractive. To be 100% fun and interesting. To be 100% all of the time doesn’t allow much room for anything else. Women are expected to be prepared for the unimaginable and the unthinkable, not to welcome it with open arms. I suggest that we take our energy and expertise, and use it to create the unimaginable and the unthinkable. This is how we will make room for the world we want to live in. This is how we will see the eventual falling away of what came before.

This essay was written by Charlotte Thurman, February 2016.

Tara: “I really want to write ‘Guten Tag, Bitches!’ Is that too much?”

Charlotte: “Who gave you the internet?”

We are currently working on our first issue: Process.
This issue will feature interviews with working female artists, an essay written by Charlotte, and a few delicious surprises. A reception/release party will be held on University of Delaware’s campus at the end of May.